By Sebastian Shakespeare for the Daily Mail

Unkindly described as Butlins for toffs, Soho Farmhouse has established itself as arguably the most fashionable private members club in the country, ever since Prince Harry whisked Meghan down there for one of their first intimate weekends together.

But I can disclose that the £1,360-a-year club — favoured by the likes of George and Amal Clooney, Eddie Redmayne and Poppy Delevingne, as well as former Prime Minister David Cameron and his wife Samantha — may have become a victim of its own success.

In a heartfelt outcry, local resident Bridget Clarke accuses it of using far more water than others living nearby. Soho Farmhouse consumes in the region of 300 cubic metres of water [every day], she alleges in a document lodged with the West Oxfordshire District Council.

Based on the average daily consumption for each person in the UK, she argues this equates to 667 people living permanently at the Farmhouse. 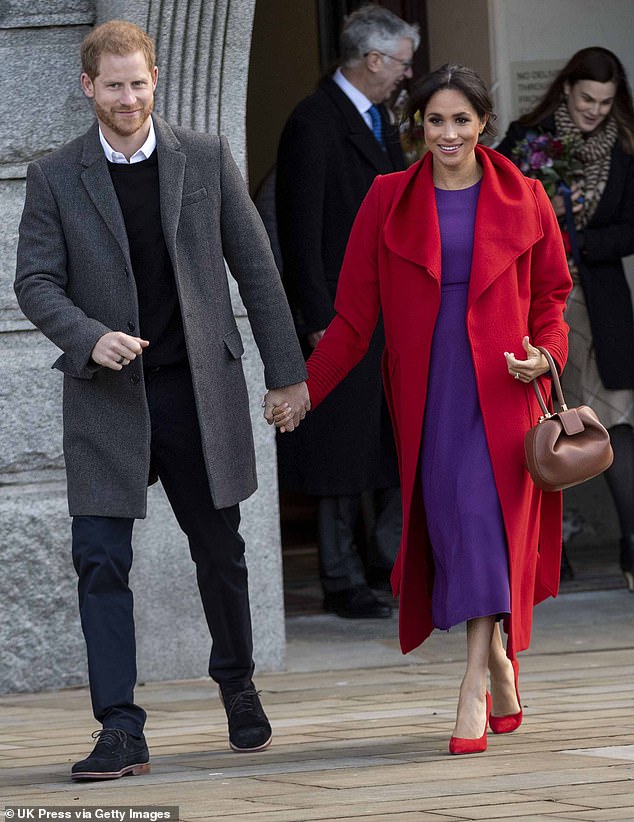 Prince Harry took Meghan to Soho Farmhouse for one of their first intimate weekends away. (Pictured) Prince Harry and Meghan during a visit to Hamilton Square to see a sculpture marking the 100th anniversary of Wilfred Owen's death in January

The club has a staff of 450, who cater for guests in 40 cabins, a seven-bedroom farmhouse and a four-bedroom cottage.

She also claims the water supplier has said that it cannot provide more water to Soho Farmhouse [which is] having to consider installing water recycling facilities.

Fearful of further development on the estate, she adds: Lets stop wasting our resources on those that do not join the community, but merely live off it. 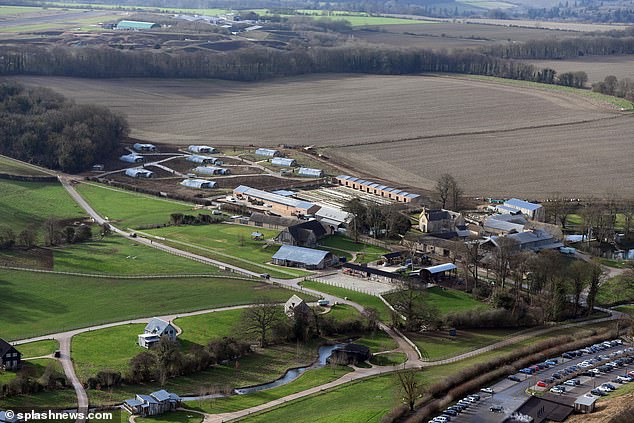 Based on the average daily consumption for each person in the UK, a critic argues that this equates to 667 people living permanently at the venue

A spokesman for Soho Farmhouse confirms it is considering installing water recyling facilities. Were looking at water recycling because thats a responsible thing to do, he tells me. Weve got rid of single-use plastics from all the [Soho] Houses in the UK. Were doing the same in the U.S. Were more focused on the environment than ever. Obviously, its something our members are concerned about. We are as well.

However, the spokesman denies that the local utility firm has said it cannot provide more water. As far as I am aware, that isnt the case, he says. Water supplier Castle Water failed to respond to comment.

Shared baths are surely the way forward. Perhaps Harry and Meghan will lead by example.

Trainspotting director Danny Boyle, who turned down a knighthood after he staged the widely praised opening ceremony at the 2012 London Olympics, says it would have been a betrayal to have accepted the honour.

Although Boyle persuaded the Queen to appear in his Olympics ceremony, he is a Left-wing republican and says he has no regrets over rejecting being made Sir Danny. He says: Its not my cup of tea at all. I did the job for the opposite reason — to feel like I belonged to something, rather than feel I was being elevated above it.

It would have been the worst betrayal to accept it.

The Oscar winner has previously said he turned it down because he believed in being an equal citizen rather than a preferred subject.

Queen's grouse about Royal Train (Well, it was British Rail)

Such is the Queens stoicism that she seldom betrays her feelings.

But former Life Guards officer Christopher Joll recalls how, during the Silver Jubilee, HM disclosed both her favourite form of transport — Concorde. Champagne at twice the speed of sound — and her least favourite: The Royal Train. You cant open the windows and the air-conditioning keeps breaking down. Joll, chairman of a Jubilee sub-committee, sensed no anti-pathy to the train as such — just to dismal Seventies standards.

It was a new Royal Train, he tells me. And in those days it was British Rail.

Victoria writer Daisy Goodwin once said she didnt plan to feature any sex scenes in the TV drama starring Jenna Coleman as it had fantastic ratings — so we dont need nudity for that.

She has clearly had a change of tune, as the third series starting this weekend features a torrid affair between a footman, who swims naked in the sea, and the Duchess of Monmouth.

There is a lot of sexual tension, says Goodwin. We have a sexy footman. He is a hot new talent. You see quite a lot of him — lets put it that way — if you keep watching. It is like an Upstairs, Downstairs tale of romance and love.

Veteran TV presenter Floella Benjamin, who turns 70 this year, is doing her best to keep in shape. I do stretching, Baroness Benjamin tells me. I used to do marathons, but I cant do that any more because the old knees have given way.

I generally feel when you get older you have to do your stretches and your sit-ups to keep your heart rate going. I also have a glass of champagne every now and then. 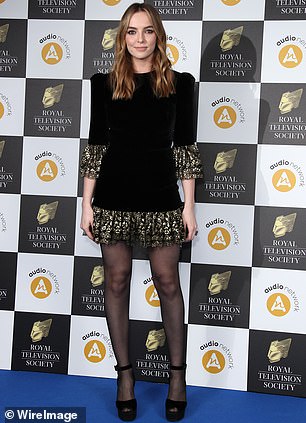 Jodie Comer is struggling to come to terms with her success

Actress Jodie Comer is struggling to come to terms with her success following her acclaimed role as a psychotic assassin in BBC drama Killing Eve.

I always have people stopping me in weird places to ask me about the show, the 26-year- old star tells me at the Royal Television Society awards at Grosvenor House, where she picked up the best actress gong in a gold-trimmed £975 black velvet mini dress by The Vampires Wife.

I had a moment the other day when I was on a packed Tube and this woman came really close to ask me about what was happening in the show next. I was so hungover and was devastated that she recognised me. Im not used to being noticed everywhere I go.

Amanda Holden has barely recovered from appearing on Celebrity Apprentice for Comic Relief. Bloody Alan Sugar! she tells me. I was totally out of my comfort zone doing something like that because I do not regard myself as a businesswoman. Alan Sugar basically called me and begged me to be on the show.

Im not even going to lie and say I did it for the greater good. It was terrifying, it was 72 hours and there were no frills.

We only had four or five hours sleep over the 72 hours. The whole thing was an exercise in sleep deprivation.

Richard E. Grant says he is not upset at missing out on the best supporting actor Oscar.

It didnt feel like a lose situation to me, the Can You Ever Forgive Me? star says, because the other nominees, all of us knew at least a month in advance — it was practically carved in stone — that [Green Books] Mahershala Ali was going to win.

So essentially none of us had to prepare a speech and enjoyed it for the ride of it. People wanted us to be wallowing in a state of bittery, but thats not what it felt like. Maybe I should have sat there with a face like a slapped a**e, but thats not how it felt. 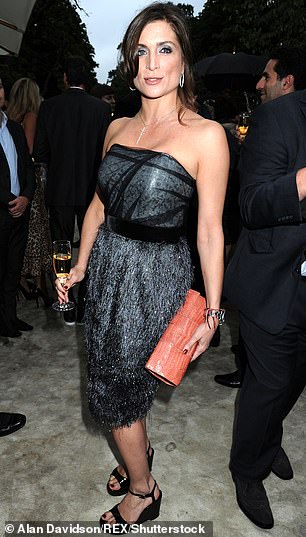 She was once dubbed the Cracker from Caracas after a four-year affair with Sir Mick Jagger. Now, Venezuelan-born heiress Vanessa Neumann has another feather in her cap.

Neumann, 47, who was engaged to Scottish landowner William Stirling and briefly married to Tory MP Sir Bill Cashs son William, has been appointed an unofficial ambassador to the UK by Venezuelas opposition leader Juan Guaido, who has declared himself interim president.

I am humbled and honoured by the trust placed in me by Juan Guaido to designate me his Ambassador to the Court of St Jamess, she says.

Words fail to express my commitment to my compatriots at this historic crossroads.

No word on how the countrys official ambassador, Rocio Maneiro, feels about it.

Has Star Trek beauty Alice Eve, 37-year-old daughter of Waking The Dead star Trevor Eve, been spending too much time in La-La Land?

She didnt even change out of her bedroom attire when she went out in Los Angeles yesterday sporting £238 striped pyjamas from High Street shop Mango, which she teamed with a Gucci headband, Balenciaga clutch and a matching striped car.

My sense of style is eclectic, she has said. To quote The Kinks, Im not a “dedicated follower of fashion”.

I follow my instincts, and if they dont fall in line with the latest fashion, then good luck to everyone. 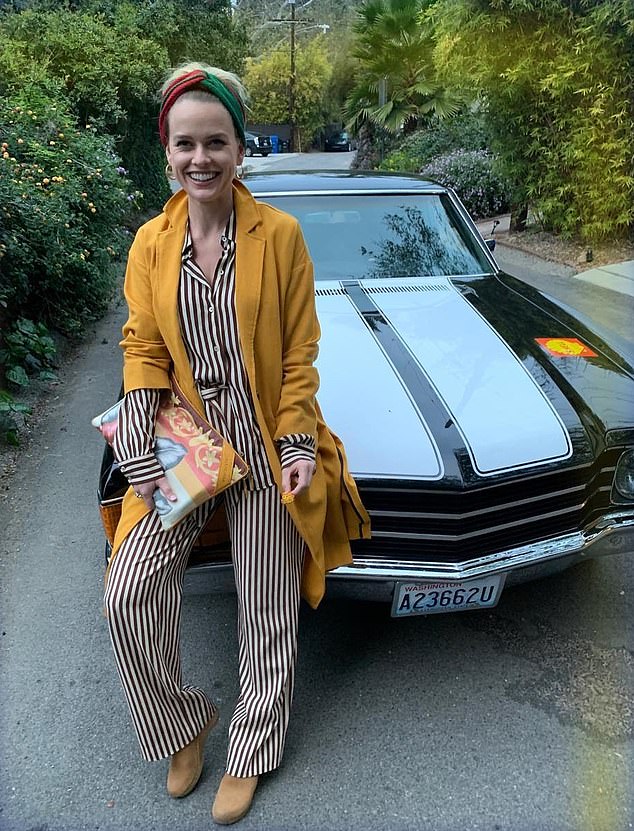