By Dailymail.com Reporter and Reuters and Afp

Dramatic images show the Venezuelan consulate in New York City abandoned and after it was taken over by officials loyal to the country's opposition leader.

A representative of Venezuelan opposition leader Juan Guaido on Tuesday defended taking control of the country's New York consulate as a 'liberation,' and promised it would soon reopen to 'all Venezuelans.'

The six-story consulate, located near the United Nations, 'was illegally inhabited by officials of the regime of (Venezuelan President) Nicolas Maduro,' said Gustavo Marcano, a senior Guaido-appointed official, adding they had 'no legal status to be here.'

As President Trump told a press conference with his Brazilian counterpart Jair Bolsonaro that his administration could impose 'a lot tougher' sanctions on Venezuela, Marcano showed journalists around the consulate. 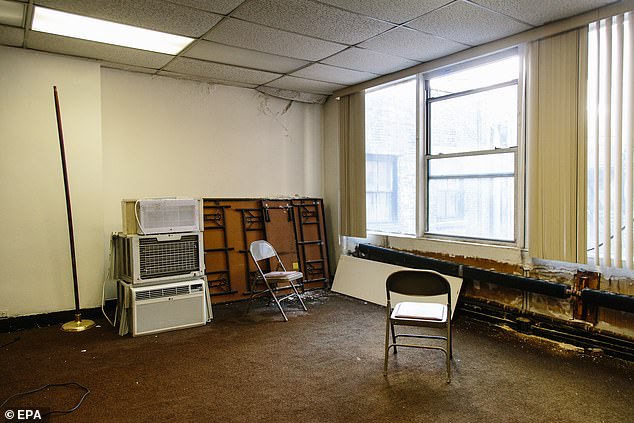 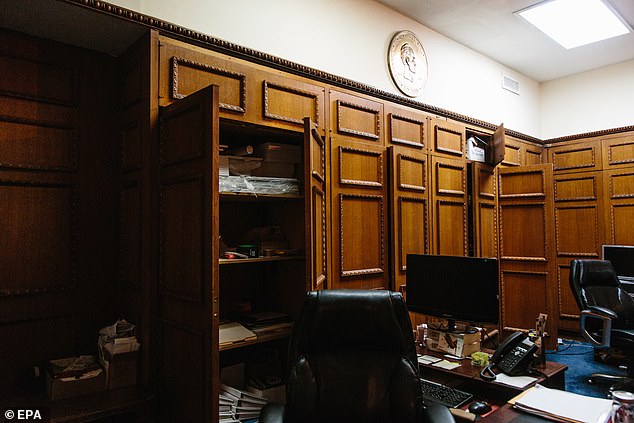 The consulate was overtaken by supporters of Juan Guaido, the opposition leader who claims to be the country's real president 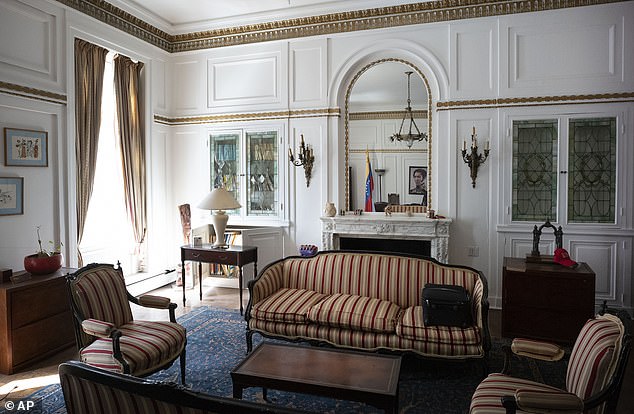 Some rooms were empty, but the building was dotted with art and pictures of former President Hugo Chavez – Maduro's predecessor – maps of Venezuela, piles of passport applications and a cabinet where shirts remained on hangers.

A computer room had been stripped, but it was not immediately clear who had taken the contents.

Guaido's ambassador to Washington, Carlos Vecchio, announced Monday that the opposition government had taken control of three Venezuelan diplomatic properties in the US: two military buildings in Washington and the consulate in New York.

A State Department spokesman confirmed that the U.S. government – which recognizes Guaido's authority along with some 50 other countries – backed the move.

'This is a welcome development for our bilateral relations with Venezuela… U.S. policy is to support democracy in Venezuela, interim President Guaido and the National Assembly, which is the only democratically elected institution in the country,' the spokesman told AFP.

In a statement on Twitter, the Venezuelan government meanwhile branded the action an 'extremely serious violation of the U.S. government's international obligations,' and threatened to take reciprocal action in Venezuela.

Vecchio added that the group expected to take control of Venezuelas embassy in Washington 'in the days to come.'

Guaido, president of the opposition-controlled National Assembly, invoked the constitution to assume an interim presidency in January, arguing that Maduros May 2018 re-election was illegitimate.

He has been recognized as Venezuelas rightful leader by most Western countries, including the United States.

'We are taking these steps in order to preserve the assets of the Venezuelans here in this country,' Vecchio said from one of the buildings, the office of Venezuelas military attache to Washington, after removing a portrait of Maduro from the wall and replacing it with one of Guaido. 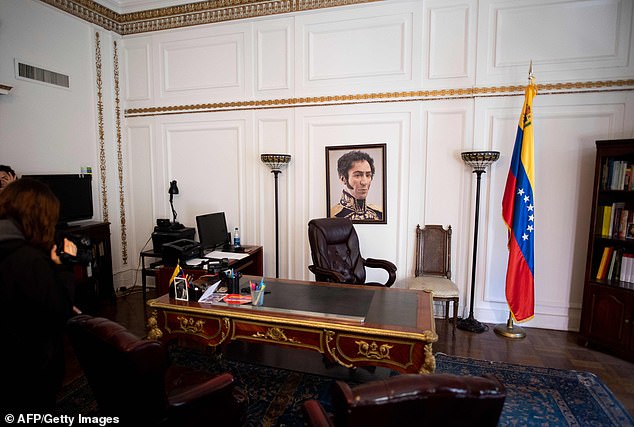 In Caracas, the Venezuelan government of President Nicolas Maduro denounced the 'forced and illegal occupation of some of its diplomatic headquarters' in the United States. The image above shows a room in the New York consulate 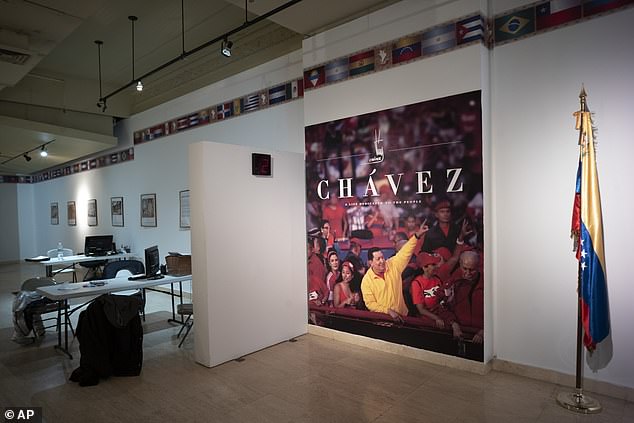 A large poster of Venezuela's former president, Hugo Chavez, hangs in an empty reception area on the country's consulate in New York 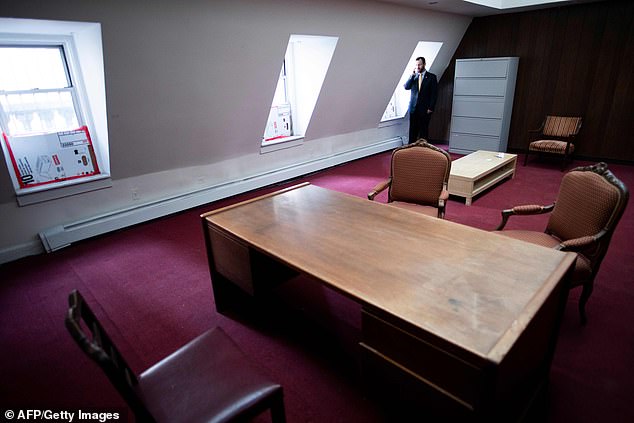 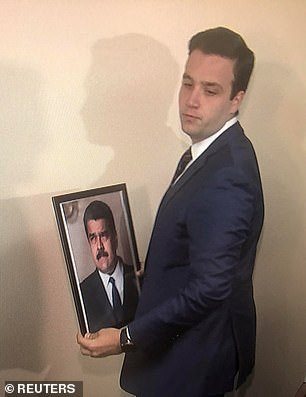 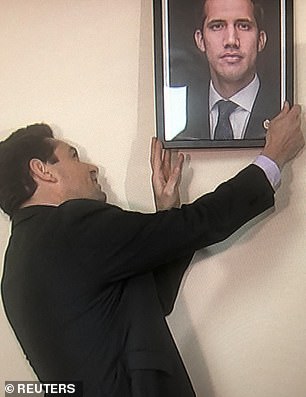 Carlos Vecchio (right), Juan Guaido's chief envoy to the United States, hangs a photo of the opposition leader at the office of Venezuela's military attache in Washington, D.C., on Monday. An aide is seen left taking down the photo of President Nicolas Maduro 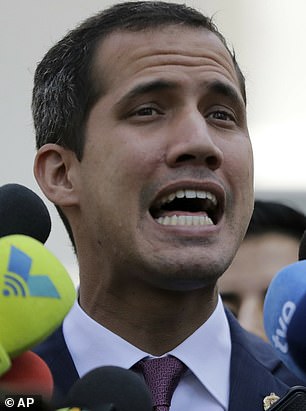 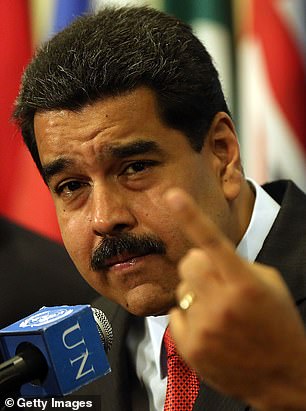 Guaido (left), president of the opposition-controlled National Assembly, invoked the constitution to assume an interim presidency in January, arguing that Maduros (right) May 2018 re-election was illegitimate

In a statement, Venezuelas foreign ministry called on U.S. authorities to 'take the necessary measures to immediately reverse this forcible occupation' of its diplomatic offices.

It said the transfer of possession violated international law on the protection of diplomatic properties.

Maduro, who has branded Guaido a U.S. puppet seeking to oust him in a coup, broke off relations with Washington after it recognized Guaido, calling diplomatic and consular staff back to Caracas.

Of 55 staff members, 12 decided to remain in the United States and support Guaido, Vecchio said on Monday.

He added that his staff would work out of the attache building, which is in the upscale Kalorama neighborhood and has an assessed value of $2.2million, according to Washington property records.