An ultra-rare Super Worm Moon has risen into horizons across the world tonight to coincide with the spring equinox.

The Worm Moon is the first full moon in the month of March and this is the first time since 1905 this has coincided with the start of spring, March 20.

For many this could be a once in a lifetime opportunity to get outside and see this unique moon, as the next such moon is not expected to grace our skies until 2044.

The supermoon is also dawning around the same time than an asteroid is passing by the Earth's surface. 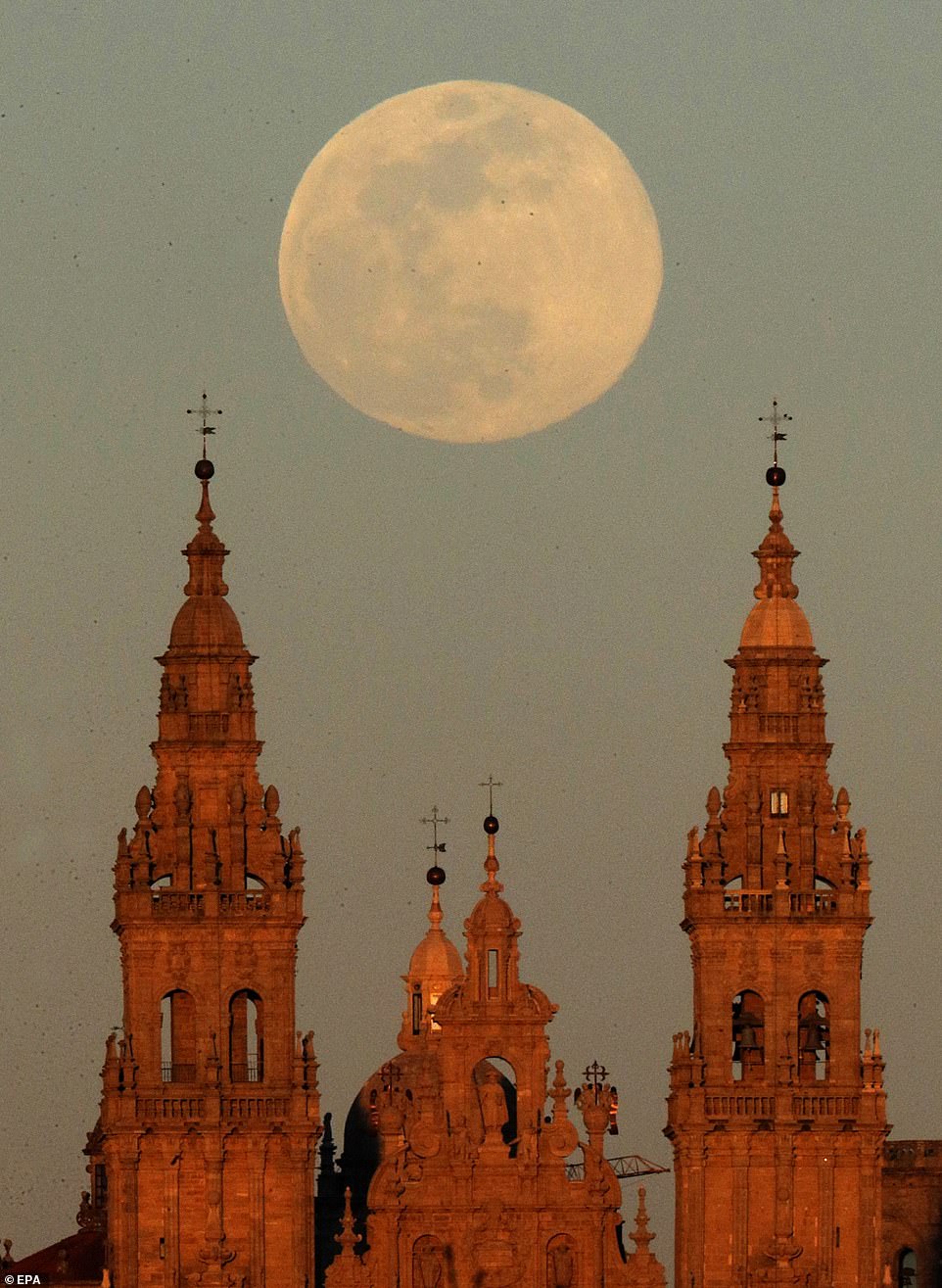 A view of the Full Worm Supermoon that announces the start of the spring over the Santiago de Compostela cathedral, Galicia this evening, taking on a stunning reddish hue in the dusk above the Spanish city 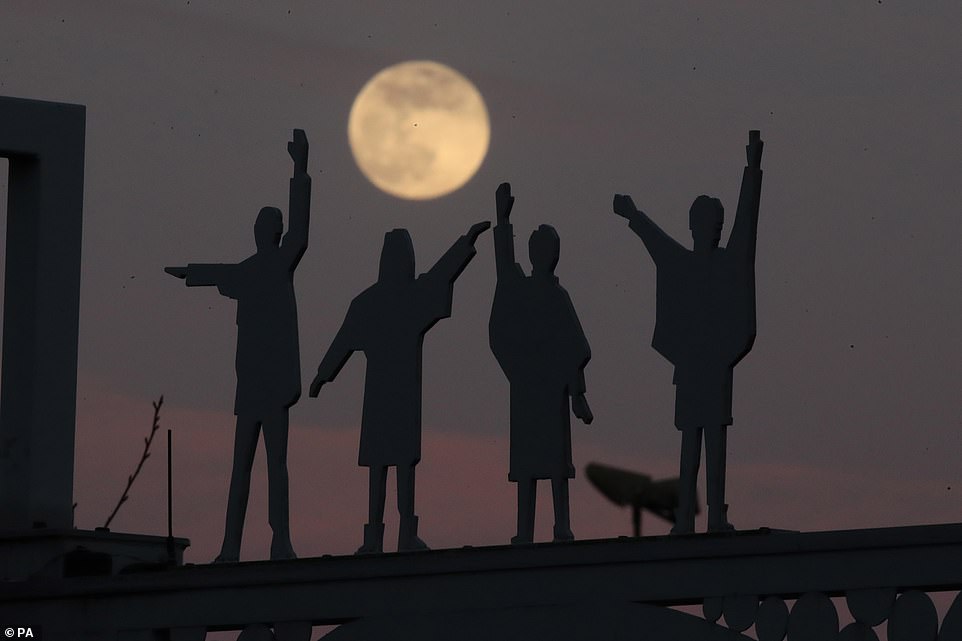 The Full Worm Supermoon dawns over the ornamental silhouettes of the Beatles, from the film Help, on Penny Lane in Liverpool 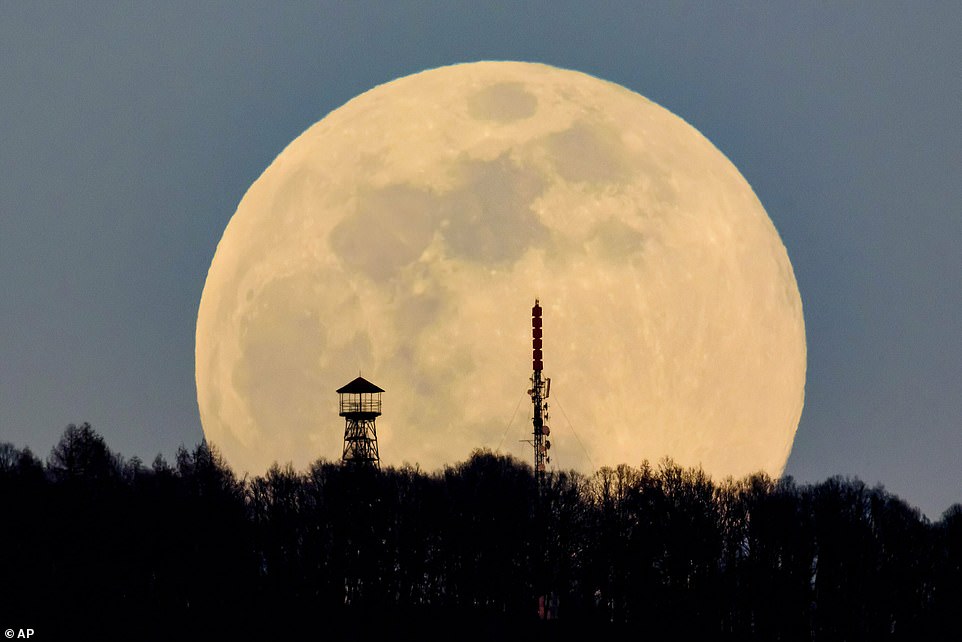 A lookout tower, left, and the broadcast tower of Antenna Hungaria at the top of Karancs mountain are backdropped by the rising supermoon as seen from the vicinity of Karancskeszi village, Hungary 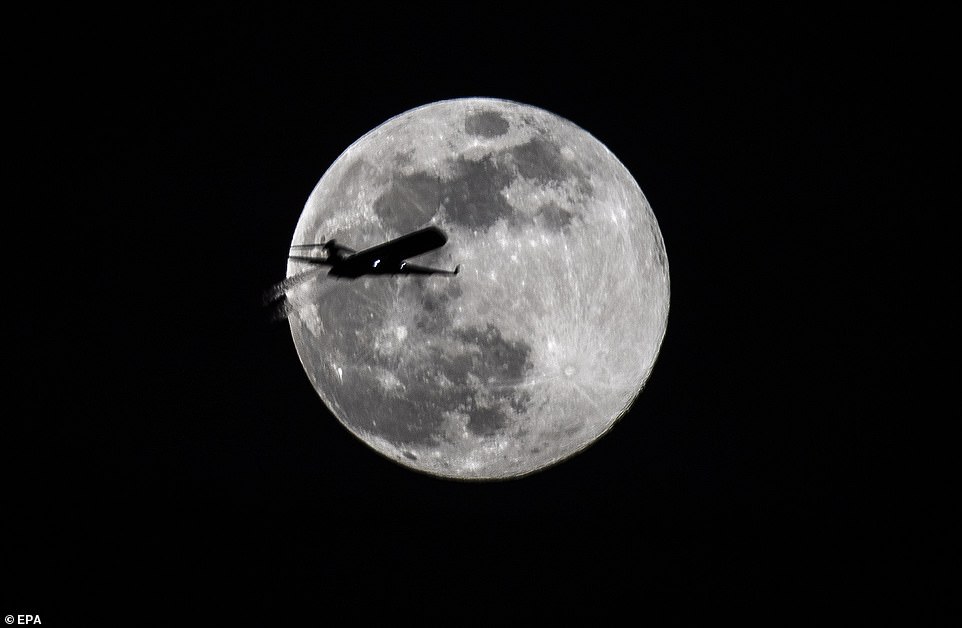 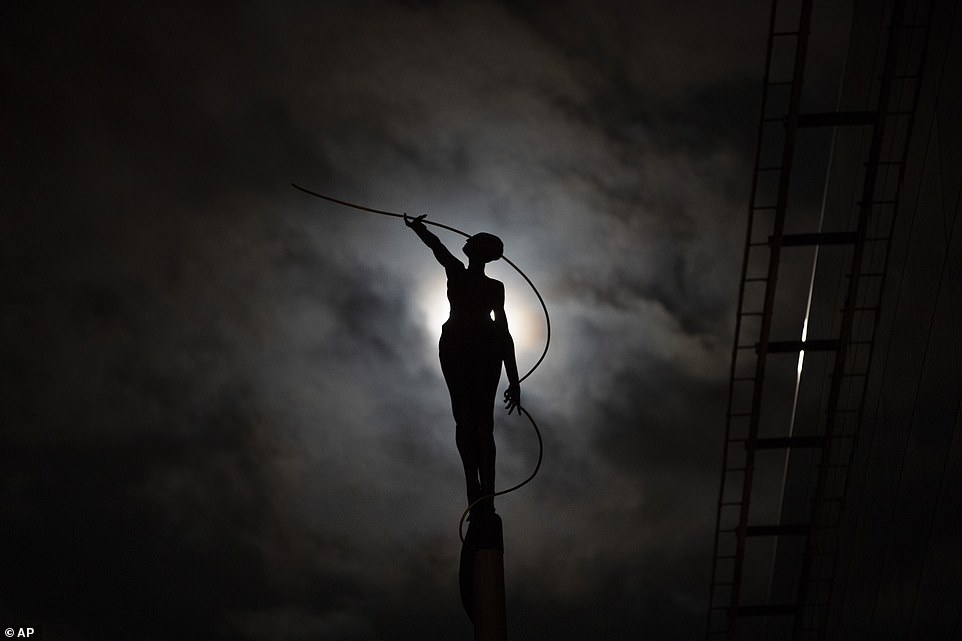 A sculpture is silhouetted against a bright cloudy sky in Brussels, Belgium, tonight – the term supermoon was first introduced by astrologer Richard Nolle in 1979 and specifically refers to a brighter than usual full moon

It is called a 'Full Worm Moon' after the Native Americans' seasonal observations that worms emerge from the earth as Spring begins.

The Worm Moon has also been referred to as the Crow Moon, Crust Moon, Sap Moon or Sugar Moon.

The Moon should be at its fullest and brightest after midnight on Thursday morning at 1:43am.

The term supermoon was first introduced by astrologer Richard Nolle in 1979 and specifically refers to a brighter than usual full moon. 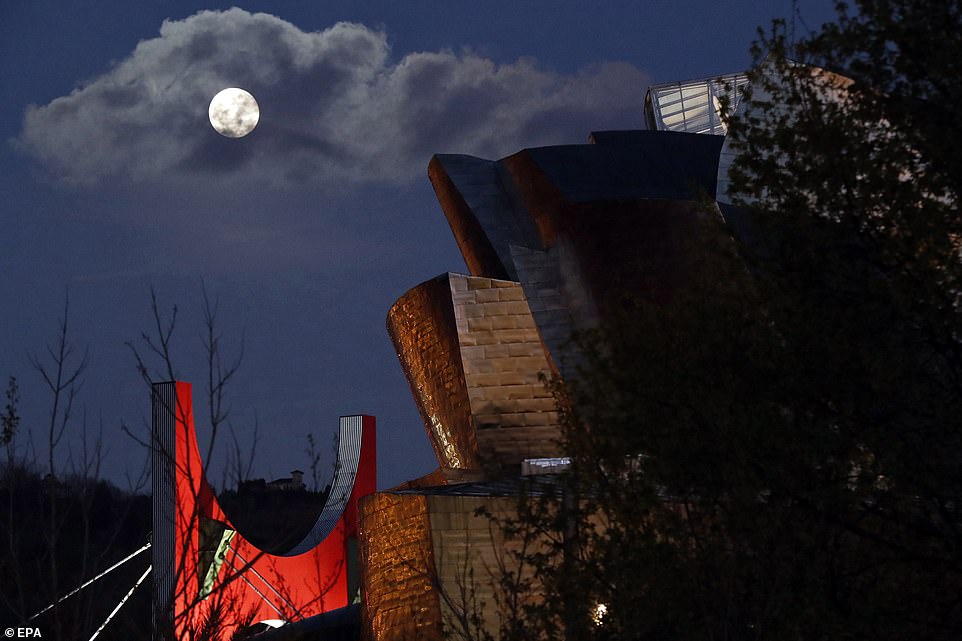 A view of the supermoon that announces the start of the spring over the Guggenheim Museum in Bilbao, Spain 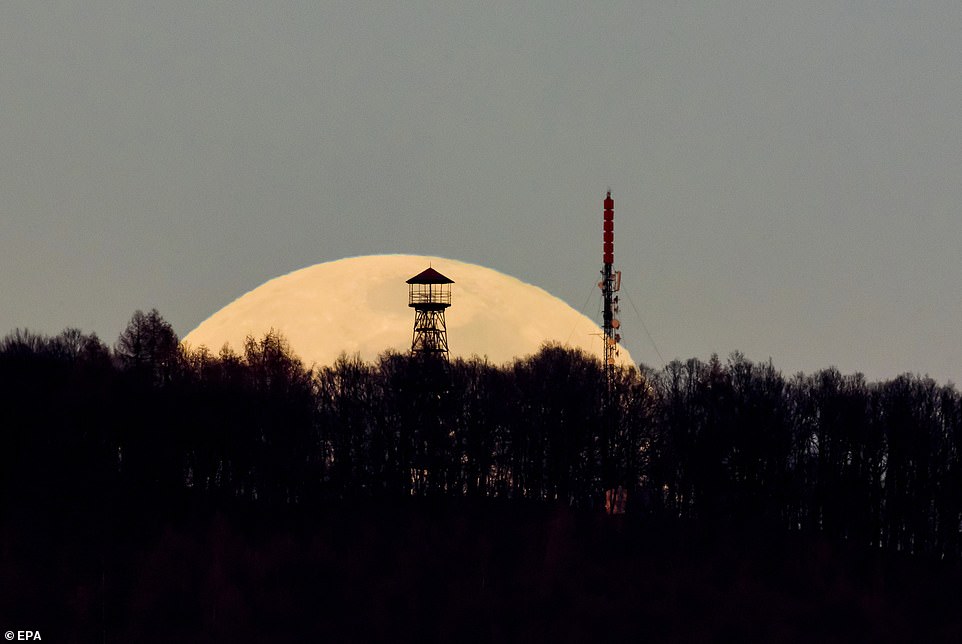 A lookout tower and antenna at the the top of Karancs mountain are silhouetted by the rising moon as seen from the vicinity of Karancskeszi village, Hungary 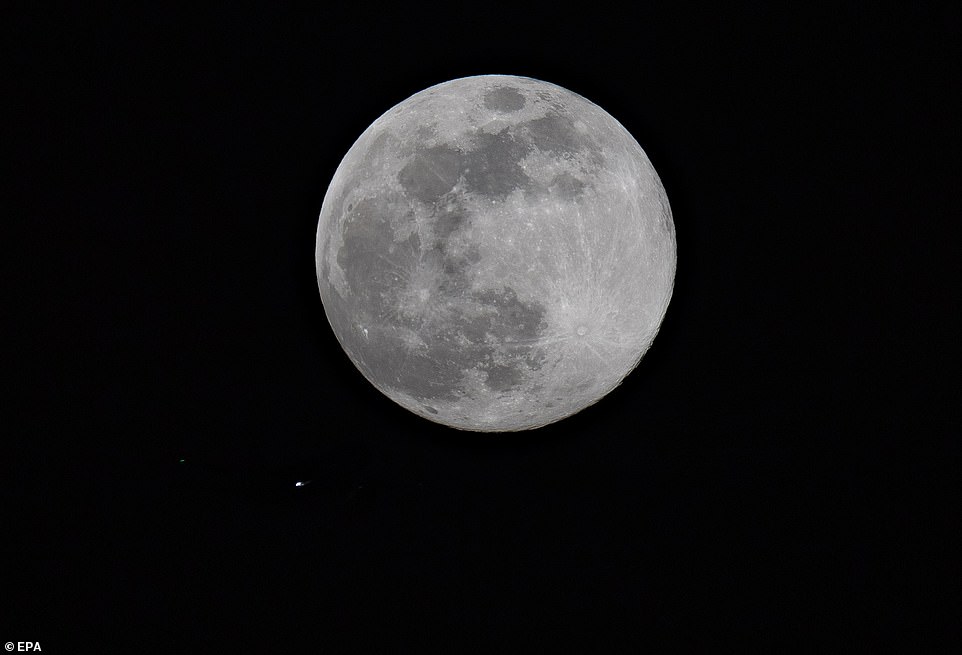 The magnificent craters of the Moon can be seen in the skies over Frankfurt in Germany, as the movements of the planets signal the start of spring

In addition, full moons during northern hemisphere winters tend to be brighter because the Earth and the Moon are closer to the Sun and because the Moon sits higher in the sky.

The February supermoon was thought to be the largest and brightest full moon of the year due to the almost exact overlap of the moon's perigee.

The perigee is when the Moon is closest point to Earth and at its fullest in its 28-day lunar cycle.

This point is reached when the Moon perfectly coincides with the fullest version of the Moon, meaning it appears up to 14 per cent larger and 30 per cent brighter than normal.

'The moon is close to its perigee, which is the closest point in its orbit to Earth. This means this full moon appears brighter and bigger than other full moons throughout the year.' 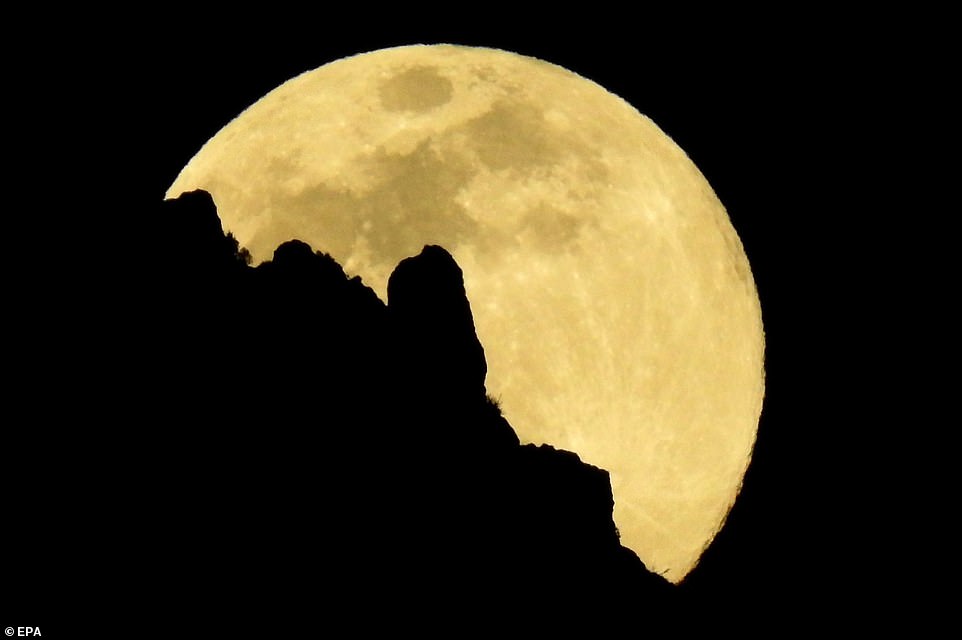 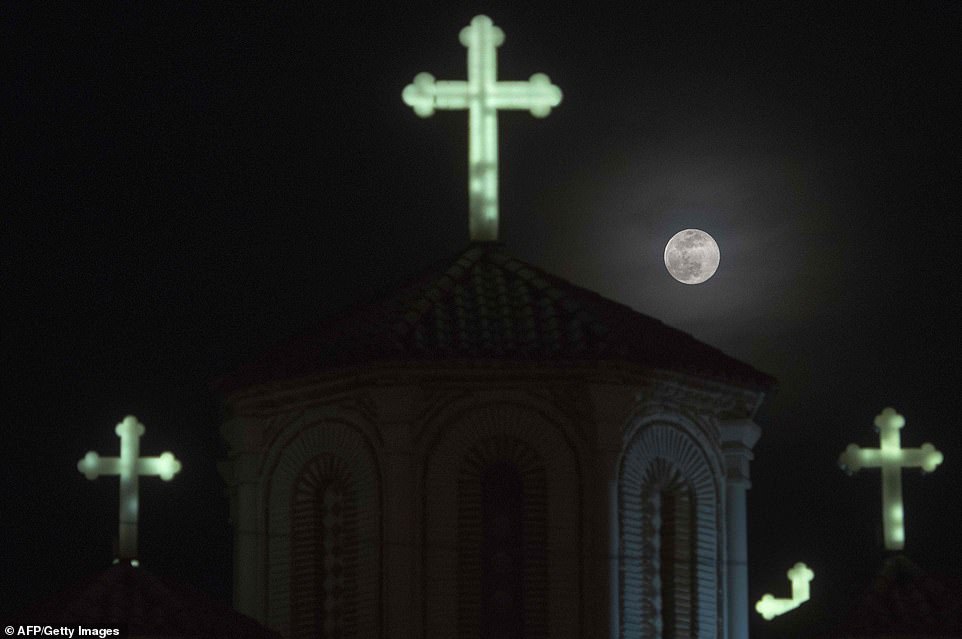 The Worm Moon announces the beginning of spring and the end of the winter season over a church spire in Skopje, North Macedonia 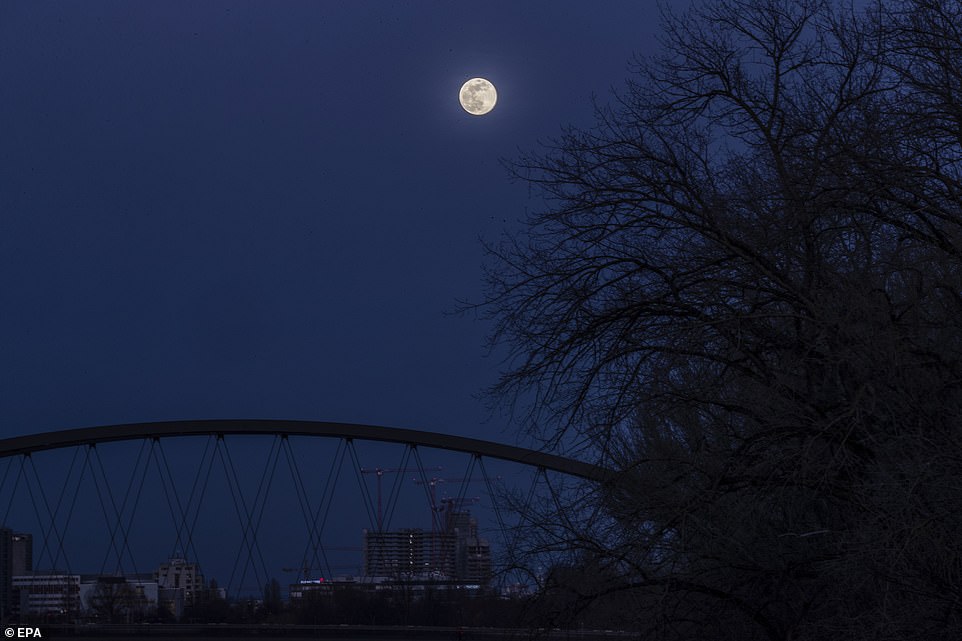 The Super Worm Moon reaches its zenith over Frankfurt in Germany earlier this evening – it should be at its brightest over the United Kingdom at 1:43am 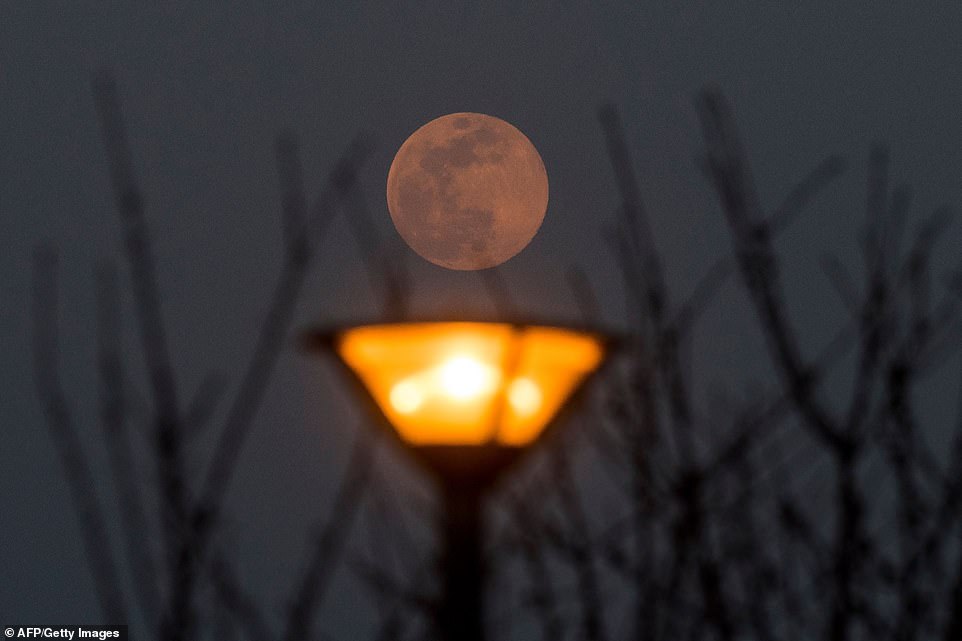 The full moon took on a reddish glow in the sky above Skopje in North Macedonia, as stargazers across the world look to their almanacs and take in the unique sight

WHAT IS A SUPERMOON? 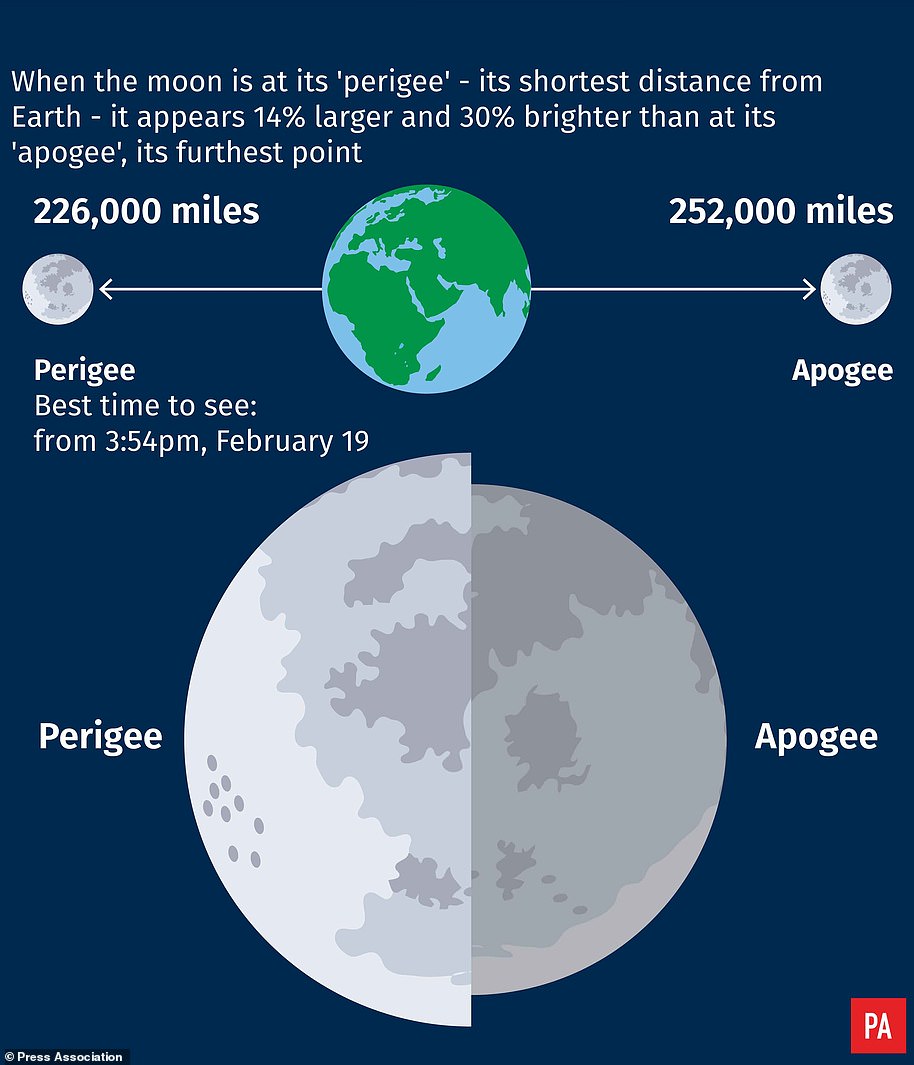 The Moon will be 221,734 miles from Earth when it is as perigee – the closest point to Earth in its orbit

A supermoon takes place when the moon is full and its orbit at its perigee point is closest to Earth.

As the Moon orbits in an ellipse its closest point – the perigee – will come very close to earth. The farthest point of the ellipse is called the apogee.

When a full moon appears at perigee, the Moon looks brighter and larger than a regular moon, hence the nickname supermoon.

February 19 will see the second lunar spectacle in a supermoon trilogy.

The first supermoon was the 'Blood Wolf Super Moon' on January 21 and the third will take place on March 21.

And it'll be officially full at 10.53am EST according to NASA's Skycal.