VORSIVKA, Ukraine — For years, Father Vasily spent his Sundays behind the altar at St. Nicholas, a church in the small town of Vorsivka, in north-central Ukraine.

Thats when the village faithful held a vote to decide whether their church should remain in the Russian fold, or join the newly created local denomination. They chose the latter, and as they did so, they also chose to replace their priest — who had advocated for remaining under Moscow.

Father Vasily found himself locked out of the church after the Orthodox Christmas service, and was soon replaced by a priest from a neighboring church. A law passed by Ukraines president, Petro Poroshenko, has allowed for a church to switch its denomination if two-thirds of the congregation agrees.

“I had a nervous breakdown,” Father Vasily told POLITICO on a recent snowy Saturday, dropping his head in his hands. 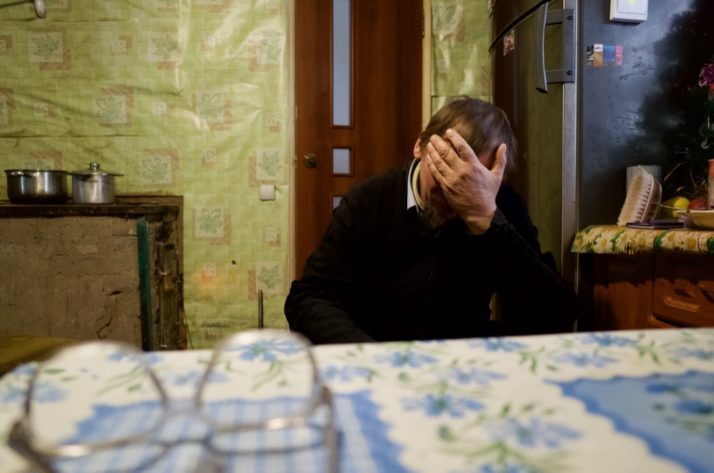 After his parishioners voted to remove him from St. Nicholas Church and switch allegiances to the new Ukrainian Orthodox Church, Father Vasily says he had “a nervous breakdown” | photos by Christopher Miller for POLITICO

The evicted cleric wasnt the only one to be upset about the change. The following Sunday, Russian Orthodox parishioners and priests from the nearby town of Malyn traveled to Vorsivka to protest the local believers decision. In the shadow of the churchs golden domes, shouting devolved into a shoving match, and it wasnt long until police arrived.

The religiously motivated quarrel in this otherwise quiet village, population 374, has made it a flashpoint in the fallout of a polarized religious struggle that — stoked by modern geopolitical tensions — risks creating major rifts in communities across the country.

It is also a sign of the challenge that lies ahead for proponents of an independent Ukrainian Church — how to convince Russian Orthodox parishes to break ties with Moscow?

The Ukrainian Church has sought independence for centuries — almost from the exact moment it fell under the control of the Russian Church in 1686.

After the collapse of the Soviet Union, two splinter Ukrainian churches broke from the Moscow Patriarchate in 1991. For nearly 30 years, the two churches — known as the Ukrainian Autocephalous Orthodox Church and Ukrainian Orthodox Church-Kiev Patriarchate — were never fully recognized by Orthodox leaders in Constantinople and deemed “schismatic” by Moscow.

The effort to form an official independent Ukrainian Church “really crystalized” after Russias annexation of Crimea and its military intervention in eastern Ukraine five years ago, according to Christopher Stroop, an American scholar of modern Russian history and Eastern Orthodoxy.

“Ukrainians have chafed at being under the thumb of a church in Moscow for a long time,” said Stroop. “But the geopolitical moment wasnt there for that movement to really take off and get the attention of the rest of the Orthodox world until 2014.”

One of the parishioners who helped organize the January vote that ousted Father Vasily from the local church in Vorsivka said Russian aggression was a motivating factor in deciding to break from the Russian Church.

St. Nicholas is now “a Ukrainian church for Ukrainians,” said Andzhela Danilchenko. “The other is controlled by Russia, and it is stoking the war against us.”

As the fighting between Ukrainian government forces and Kremlin-backed separatists in the countrys east has dragged on, its become increasingly difficult to separate the centuries-old ideological conflict from the ongoing political and military conflict.

With his popularity plummeting ahead of Ukraines presidential election in March, Poroshenko likely saw the issue as an opportunity to win back public support. With an independent church, Ukrainians would finally gain “spiritual independence that can be compared to political independence” from Russia, he said in December.

The president spent hundreds of thousands of dollars of his own money to cover the country in billboards promoting the new church and his reelection platform — centered around “army, language, faith.” 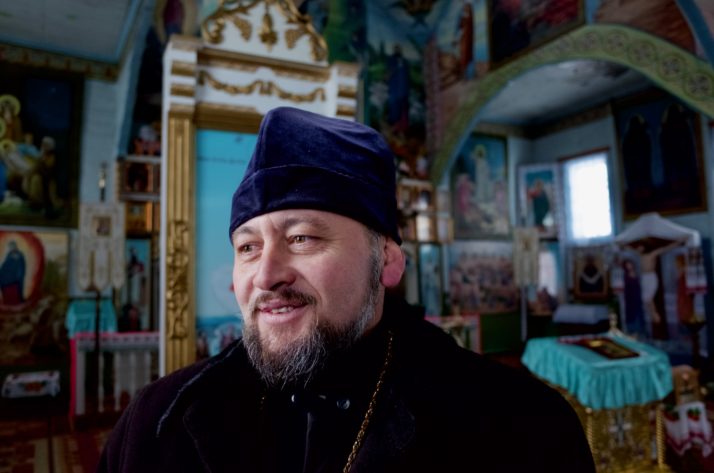 The “new” Father Vasily, a priest in the Ukrainian Orthodox Church, after delivering his first liturgy in the 150-year-old house of worship since it left the Moscow Patriarchate | Christopher Miller for POLITICO

When the religious decree recognizing the independent Ukrainian Church — known as the Tomos — was signed in early January, Poroshenko hit the road with the new churchs elected head, a 40-year-old former bishop named Metropolitan Epiphanius. Ukrainians dubbed it his “Tomos Tour.” Every independent Ukrainian poll since has shown it likely helped the incumbent presidents ratings.

The injection of politics into the highly fraught debate hasnt just irked detractors in the Moscow-allied churches, but Ukrainians who support the new church as well.

“Poroshenko is exploiting the Tomos absolutely godlessly, making the independence of the [Ukrainian] Church a decoration for his election campaign,” Oksana Syroid, the Ukrainian parliaments vice speaker, wrote on Facebook last month.

Poroshenko has also claimed an independent Ukrainian Church is a matter of national security, arguing that the Russian Orthodox Church has openly supported the Kremlins military interventions in Ukraine and had spread propaganda to undermine the government in Kiev.

The new decree predictably enraged Russias political and religious leaders, who had exerted enormous pressure to dissuade Patriarch Bartholomew, the archbishop of Constantinople and the spiritual leader of Orthodox believers worldwide, from allowing the split.

The creation of an independent Ukrainian Church “could turn into a heavy dispute, if not bloodshed,” Russian President Vladimir Putin told reporters in his annual end-of-year press conference in Moscow.

“We are witnessing illegal meddling in the internal life of Ukraines Orthodox Church, a rude, anti-canonical intervention in its area,” Patriarch Kirill of Moscow, the leader of Russias Orthodox Church, said after the January ceremony that solidified the split.

Speaking at a Russian Orthodox Church event alongside Kirill in Moscow last month, Putin doubled down, saying Russia “reserve[s] the right to respond and do everything possible to protect human rights, including freedom of religion.” The thinly veiled threat resonated with officials in Kiev who recalled the Russian leaders justification for annexing Crimea in 2014 and backing pro-Moscow separatists that same year: defending Russian speakers. 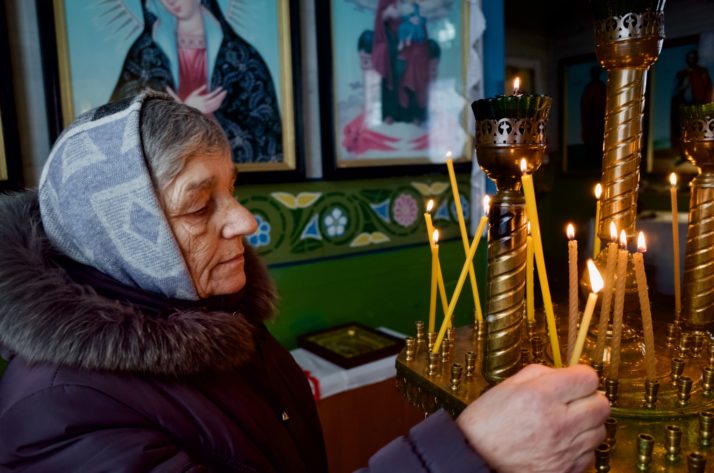 In December, Vasyl Hrytsak, the head of Ukraines main security service, known as the SBU, warned that the Kremlin is likely to use the religious fight as “a pretext for open military invasion by the Russian Federations armed forces of our country.” He also claimed last week that the SBU has intelligence that Russias security services are planning attacks against 20 churches in the Moscow Patriarchate in an attempt to exacerbate tensions ahead of Ukraines presidential election in March.

Politically, the church schism deals a serious blow to Moscows historic claims to Kiev and Putins expansionist ambitions. The Russian Orthodox Church and its Moscow Patriarchate in Moscow have long claimed exclusive jurisdiction over Orthodox churches in Ukraine.

The Russian Orthodox Church now stands to lose between 30 and 40 percent of its roughly 150-million strong membership, as well as millions of dollars in church property.

More than 300 parishes in Ukraine have switched from the Moscow-aligned church to the new Ukrainian Church since January, according to Ukraines Religious Information Service. The St. Nicholas Church in Vorsivka, where Father Vasily lost his job, was one of roughly a dozen in the north-central Zhytomyr region to do so.

The switch is “a big deal,” said Stroop. By embracing the new Ukrainian Church, parishes “are saying we are completely rejecting Moscows meddling in domestic affairs.”

But uptake has been slow. St. Nicholas is, for now, effectively a denominational island, surrounded by parishes that have so far refused to flip or are hesitant about turning away from Moscow.

“We remain a church of the Moscow Patriarchate, thank god,” Father Leonet of the St. Alexander Nevsky Church, a 20-minute drive south in Krasnobirka, said in an interview last month.

His congregation “will continue to practice our faith and stand firm as our grandfathers and great-grandfathers stood,” he said, as mourners gathered at the church before a funeral.

“Why create another church, so to speak, in Ukraine if there is already a canonical church?” asked Father Artemy, from the St. Pokrovskiy Church in Malyn, near Vorsivka.

Religious leaders from the Russian Orthodox Church in Ukraine are quick to point out that the 300 or so churches that have changed allegiances in the past month are a relative drop in the bucket, given there are still some 12,000 to 14,000 Moscow-aligned churches in Ukraine.

“That is less than 1 percent of our churches,” Archbishop Kliment, a staunch opponent of the new Ukrainian Church and a leader in the Moscow Patriarchate, said in an interview on the grounds of Kievs Pechersk Monastery, a popular holy site where mummified monks rest in a maze of underground caves.

“Going to another church is a betrayal,” he added.

Some 5,000 parishes that previously adhered to the two unofficial Ukrainian churches — the Ukrainian Autocephalous Orthodox Church and the Ukrainian Orthodox Church-Kiev Patriarchate — have also become part of the new independent church. Most are located in Ukraines predominantly pro-European west and center, while the Moscow Patriarchates influence in strongest in the east and south.

Since December, SBU agents have interrogated at least a dozen priests and searched their residences and church properties as part of investigations into “treason,” “incitement of religious hatred,” and stolen state property.

Among those interrogated and accused of working on behalf of Russia to destabilize Ukraine was Metropolitan Pavel, the senior-most cleric at the Kiev Pechersk Monastery. The security service allege valuable religious icons have disappeared from the monastery and opened a criminal probe last month. Metropolitan Pavel and the monastery have denied all allegations.

In Moscow Patriarchate churches in the north and west, the SBU interrogated priests after it said it had discovered copies of a pamphlet produced by a group called the “League to Defend Orthodoxy,” which rejects an independent Ukrainian Church.

In response, the SBU released its own pamphlet, highlighting what it calls “terrorist activities of Russian special services in Ukraine and [the] Kremlins use of the religious structures of the Moscow Patriarchate in the hybrid war.”

“It is interesting that Soviet-era tactics are being used against us by a state that is supposedly on a European and democratic path,” Archbishop Kliment said, commenting on the SBUs activities.

On a wintry Sunday morning last month, Zoya Khrushchevskaya, a parish-appointed keeper of Vorsivkas 150-year-old church, unlocked its wooden doors for roughly 20 believers to congregate inside.

Their choice had nothing to do with the SBU, said Khrushchevskaya and fellow parishioners Antonina Mykhailivna and Antonina Nikolayevna, two elderly women who preferred their patronymics be used instead of their surnames.

Members of Ukraines right-wing nationalist Svoboda party came from nearby Malyn to support their pro-independence cause, the women said. But they insisted nobody was pressured to vote.

“We simply asked: Who here supports changing our church to the new Ukrainian Church?” Mykhailivna said, describing the scene that played out inside the local Palace of Culture building next door to St. Nicholas earlier in January. A show of hands sealed the deal.

Only four people opposed the move, because “they have children who live in Russia and didnt want to be cut off spiritually,” she added.

Of course, Father Vasily also voted against the change. And while it threw him into a depression, he said, he doesnt hold it against them.

“Jesus Christ said it is necessary to pray even for your enemies,” he said.

Read this next: Socialists election dilemma: Stick or twist