US President Donald Trump has confirmed that 400 US soldiers will remain in Syria indefinitely while once again promising a complete defeat of Islamic State terrorists there, specifying that it would be “by tonight.”

Trump had, apparently, been well-prepared to make the revelations, as he faced reporters on Wednesday, equipped with a printed map of “ISIS defeat.” The before/after picture shows what Islamic State (IS, formerly ISIS/ISIL) terrorist group used to control “on election day” back in 2016 and how it lost its territory since then. 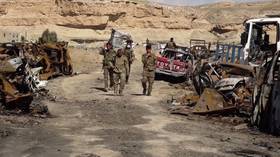 “When I took it over, it was a mess,” Trump said, pointing at the map. Today “there is no red. In fact, theres actually a tiny spot which will be gone by tonight.”

The US president was referring to the Baghouz area in eastern Syria where hundreds of IS terrorists and their families are holed up in a small camp under a siege laid by US-backed Kurdish-led militants. Notably, Trump did not give any credit to the Syrian Army, Russia and other allies for reducing the self-styled caliphate to its current miserable state.

The president also confirmed the decision to leave 400 US troops in Syria – 200 in the north and 200 in the Al-Tanf area at the Jordan border. US troops have been occupying parts of Syria for years, citing the need to fight IS. Such an explanation is particularly dubious when it comes to the Al-Tanf area, since the terrorist group is long gone from there and US troops and their allied militants are facing only Syrian government forces.

While Trump announced an abrupt decision to withdraw from Syria last December, he has flip-flopped on the details since then. The withdrawal of the whole 2,000-strong US contingent promptly went off the table, with Trump agreeing to leave 200 first, and then 400 personnel in the war-torn country.

Also on rt.com US announces more support for heroic White Helmets in Syria