A young British woman who was tried under terrorism laws entered a beauty contest called Miss Hitler as “Princess Buchenwald,” prosecutors say. The pageant was allegedly launched by a banned neo-Nazi group to boost recruitment.

Alice Cutter, 22, had signed up for the Miss Hitler beauty contest under the nickname “Buchenwald Princess” and “won” the competition, prosecutor Barnaby Jameson told jurors in a Birmingham court on Wednesday, local media reported. 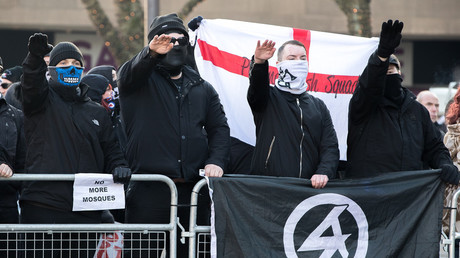 Jameson added that the womans jarring choice of nickname is “no coincidence,” since her boyfriend had visited the Nazi death camp Buchenwald, where he was photographed performing a Nazi salute in the execution chamber.

Cutter, who is from Halifax, along with several others, is accused of spreading hateful ideology and promoting “pathological racial prejudice” while being an active member of the far-right extremist group National Action, which was banned under terrorism laws in 2016.

The beauty pageant itself was allegedly set up by the group to bolster recruitment. Calling the organization “the fellowship of hate,” the prosecutor presented the jury with a picture alleging to show Cutter wearing a National Action mask.

The suspect was charged with the crime last year. She denied all allegations and pleaded not guilty during a previous hearing in January.

The UK has launched a crackdown on right-wing extremists in recent years. Several high-profile court cases appeared following the campaign. During one of these, National Actions leader, Christopher Lythgoe, was sentenced to eight years in prison.