Google has been hit with a €1.5 billion ($1.7 billion) fine by the European Union. The sanction marks the third antitrust penalty against the Big Tech firm in less than three years.

The European Commission (EC) accused the California-based company of abusing its dominant position by banning third-party rivals from displaying search ads and favoring its own shopping comparison service, according to EC Commissioner for Competition Margrethe Vestager.

“Google has cemented its dominance in online search adverts and shielded itself from competitive pressure by imposing anti-competitive contractual restrictions on third-party websites. This is illegal under EU antitrust rules,” Vestager said, speaking in Brussels Wednesday. 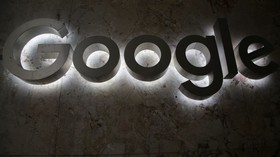 The decision to fine Google reportedly came after a seven-year investigation into its search algorithms. The fine accounts for 1.29 percent of Googles turnover in 2018.

“The misconduct lasted over 10 years and denied other companies the possibility to compete on the merits and to innovate,” the official said.

Google has defended the use of the technology, saying that it has been in place since 2006 and is now superseded, being a minor product.

Last year, the EU anti-monopoly watchdog imposed a record-breaking fine of €4.34 billion (some $5 billion) on Google over the breaking of antitrust laws.

The corporation was charged with bundling its search engine and Chrome apps into the operating system, blocking phone makers from creating devices that run forked versions of Android, and making payments to large manufacturers and mobile network operators to exclusively bundle the Google search app on handsets.

In June 2017, the corporation was slapped with a €2.42 billion ($2.7 billion) EU antitrust fine, after it was found to have abused its dominant position by “systematically favoring its own shopping comparison service.”