EU Greens to conservatives: Change to get a deal

European Greens launched their European election campaign on Wednesday with a pledge to fight climate change and corruption — and a warning for the Continents conservatives.

The partys two lead candidates, Bas Eickhout and Ska Keller, presented a 12-point manifesto for the European Parliament election in May that includes traditional green demands to fight climate change, invest in a sustainable economy and improve public transport. The manifesto also stresses human rights, with a promise to “stop arms exports to dictators and warring parties.”

The Greens had a message for the poll-leading European Peoples Party and its lead candidate, Manfred Weber. Eickhout said his group would be part of an EPP-led, pro-EU coalition in the next Parliament only if the conservatives promise “fundamental change” and a more centrist program. He accused the conservatives of moving too far to the right on immigration and having been too soft on Hungarian Prime Minister Viktor Orbán, now threatened with expulsion from the EPP.

While the EPP is projected to come first in Mays election, the next Parliament is forecast to be more fragmented than the current one. That means the EPP will need more partners than previously to turn its promises into policy.

“Yes we will talk, but we will not just say yes to the same business as usual and then, here and there, a little green flavor,” Eickhout declared. “We really want fundamental change, and thats going to be our demand on the table.”

“Overall we have a very good chance at getting the largest group in the European Parliament weve ever had” — Reinhard Bütikofer, co-chair of the European Green Party

“If Manfred Weber, is willing to shift from his past policy and move in that direction, we can talk, we can form a majority,” he said. “If he wants to keep on moving to his right side, as the EPP is doing in more and more countries, then there wont be a majority for him.”

The Greens also sought to put some daylight between their party and French President Emmanuel Macron. Keller described Macrons op-ed calling for a European renaissance as “interesting” but noted some of his proposals are already in place. “When we look at the content,” she said, “we have question marks.”

The Greens suffered a loss to Macron on Wednesday when French Green MEP Pascal Durand told the weekly LObs he wants to run in the election for the French presidents La République En Marche party.

Europes Greens were encouraged by strong showings in elections in Bavaria, Belgium and Luxembourg last year, which showed them threatening traditional socialist parties for dominance on the center left. But they face a big battle in the European Parliament election, partly because they will lose six British MEPs due to Brexit. The Greens have also struggled in the south and east of the Continent to replicate the success they have enjoyed in the west. 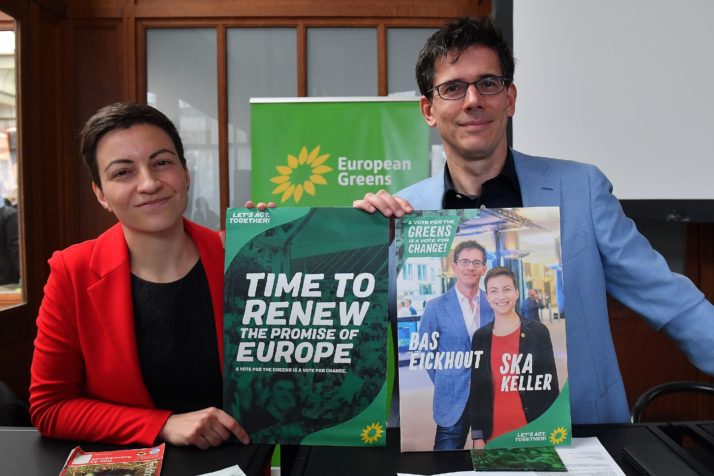 European Green party leading candidates Ska Keller from Germany (L) and Bas Eickhout from the Netherlands pose for a photo during the launch of the European Green Party campaign for the European election in Brussels on March 6, 2019 | Emmanuel Dunand/AFP via Getty Images

According to POLITICO projections, the current 52-member Green group will shrink by five in the next European Parliament.

“Overall we have a very good chance at getting the largest group in the European Parliament weve ever had,” he said.