Warsaw seeks to maintain dialogue with Israel but only with politicians and organizations able of talking “constructively,” a top Polish diplomat has said, referring to fallout from remarks by the Israeli interim foreign minister.

“Theres no conflict out there, as it means a quarrel between two sides. We have a statement by a single politician, which compromises himself, first of all, yet, undoubtedly, complicates our relationship,” Polands Deputy Foreign Minister Szymon Szynkowski said at a press conference on Wednesday. Warsaw will only engage in dialogue with those Jewish organizations and politicians who are supportive towards Poland, while ignoring those, who make “insulting remarks,” he added.

Diplomatic relations between Warsaw and Tel Aviv have been quite strained recently, damaged by a controversial law adopted last year in Poland. The legislation bans phrases like “Polish SS,” “Polish death camps” and so on, prohibiting any implication that the Polish state and the Poles had been fully complicit in Nazi mass murders there during WWII. The legislation had initially provided for up to three years behind bars for persons convicted of this behavior, yet it was watered down later, and now pointing to the role played by the Poles in the Holocaust is merely a civil offence, punishable by a fine. 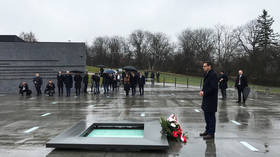 While the diplomatic spat appeared to be over, it was reignited this February by Israeli Prime Minister Benjamin Netanyahu, who yet again accused the Poles of “collaborating with Nazis” and condemned the “whitewashing” of history. Netanyahu's remark was swiftly echoed by Katz, who ultimately managed to make it worse.

Katzs comment caused an uproar in Poland, with Foreign Minister Marek Magierowski calling it “shameful and racist” and demanding an apology. As Tel Aviv did not apologize, Poland dropped out of the Visegrad 4 summit, hosted by Israel. Warsaw's move then ultimately led to the cancelation of the whole event.

To try and fix the attempts to “distort history” and accuse the Poles of contributing to the Nazi crimes of the WWII era, the Foreign Ministry has issued a booklet, dubbed “How it was in reality,” Szynkowski revealed. The booklet, printed in English, German and Polish, is based on interviews with the survivors of Nazi death camps.

“The booklets have been sent to countries where the problem [of history distortion] emerges the most often: to the US, the UK, Germany and Canada,” the diplomat said.