The Italian fired his bike past the Repsol Honda of world champion Marc Marquez on the home straight, taking the flag just 0.023 seconds ahead of his rival. Briton Cal Crutchlow finished a close third, only 0.32 seconds adrift.

Fans could scarcely have wished for a closer opening salvo in the battle for the 2019 championship. The top 15 riders were separated by a whisker over 15 seconds, a premier class record, and the top five by only 0.6 seconds. Yamaha's Maverick Viñales had taken pole position after an imperious qualifying session; but an abysmal start saw his advantage evaporate by the first corner.

Dovizioso, by contrast, leapt to an early lead — perhaps thanks in part to mysterious new technology on his Ducati. The Bologna outfit appeared to employ a special "holeshot" device, thought to give an advantage from the line. Dovizioso was observed on the grid flicking a dashboard switch, and rocketed away from the pack.But the Italian was unable to stretch his advantage and soon found himself overhauled by Alex Rins, riding the impressively rounded Suzuki. The two then battled closely, with Marquez — who had set a new lap record in qualifying — also entering the fray.Visit CNN.com/sport for more news, features and videos

For a while it looked like Suzuki might score its first ever podium in Qatar, but it wasn't to be. Perhaps the most remarkable story of the race was emerging behind Rins, in the form of Crutchlow, the satellite Honda rider.The Briton had shattered his ankle during practice at last year's Australian MotoGP, only barely recovering in time for the season opener in the Doha desert.If the Suzuki lacks anything this term it is top end speed, and Crutchlow's Honda gradually took advantage. With three laps remaining, Rins drifted wide. Crutchlow struck to claim and ultimately hold third.In a pulsating final lap, Dovizioso and Marquez traded places. In the final sector, Marquez lunged under the Ducati, taking what looked to be a decisive lead, but he ran his Honda wide.Dovizioso made a similar error, but managed to wrestle his bike in front of Marquez and — in a repeat of last season's race — beat the champion to the line.READ: MotoGP: Off-season plot twists promise drama ahead

The win was not without question marks, however; Honda, Suzuki, Aprilia and KTM lodged a protest at a new aerodynamic wing on the Ducati's rear suspension. The protest was rejected, though an appeal was later lodged.Post-race, the riders elected to focus on the contest rather than the controversy."Marquez gave it everything he could, as usual, and pushed me to the limit," Dovizioso told reporters."We made the most of our strengths, that is, acceleration and top speed, but we still need to improve our corner speed. This year there are plenty of quick riders and it'll be crucial not to lose too many points on less favorable tracks." 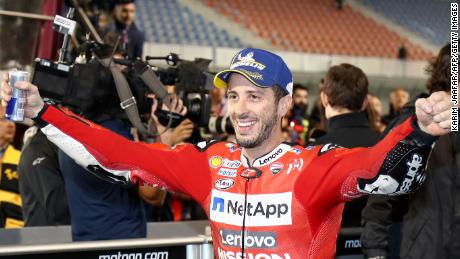 "It was exactly the same as last year!" Marquez lamented. "I tried to push hard but here when you overtake you just run wide and you can't keep the line. I tried to be there, to push a little and just be there until the end. I'm very happy with these 20 points because normally we struggle here."Crutchlow was surprised at his podium finish, telling reporters he would have laughed off such a suggestion after practice. He also admitted his MotoGP career had been in the balance during the winter."To come here and get a podium is a dream, because we didn't know I was going to be back at all at one point," he said.

While Viñales was left ruing his poor start, his Yamaha teammate Valentino Rossi was upbeat after clawing his way to a creditable fifth from 14th on the grid."I felt good with the bike today and I also enjoyed coming from the back, so it's not so bad," the Italian said after the race. "I arrived in fifth, that's good, especially because I'm 0.6s from the victory, but at this track we are always good … we'll take this result."MotoGP now travels to Argentina for the second race of the season on March 31.